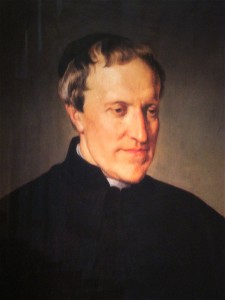 Antonio Rosmini, Catholic priest and founder of the Institute of Charity (a religious congregation), dedicated a great part of his considerable intellectual ability to the study of philosophy. In particular, he wished to lay firm foundations for an objective philosophy which would serve as an antidote to the seed of scepticism sown by the Enlightenment. For him, philosophy, science and faith, which separated finally and disastrously in the 19th century, could be and should be complementary in the search for knowledge. Faith and reason were for Rosmini “like two wings on which the human spirit rises to the contemplation of truth”.

Despite opposition from secular opponents and from within the ranks of his fellow-churchmen, Rosmini never wavered in his aim. Except in Italy, however, and to a certain extent in nineteenth century England, Rosmini’s proposals fell on deaf ears.

Today, the urgency, importance and relevancy of Rosmini’s task and endeavour have finally been recognised, at least by co-religionists. The fruitful relationship between philosophy and faith is seen “in the courageous research pursued by more recent thinkers, among whom I gladly mention…Antonio Rosmini…in referring to these I intend not to endorse every aspect of their thought, but simply to offer significant examples of a process of philosophical enquiry which was enriched by engaging the data of faith. One thing is certain: attention to the spiritual journey of these masters can only give greater momentum to both the search for truth and the effort to apply the results of that search to the service of humanity” (Fides et Ratio, 74).

Rosmini was born in 1797 at Rovereto in the north of Italyand died at Stresa on the shores of Lake Maggiorein 1855. During his relatively short life he made a enormous contribution to the social, political and religious life of the times. Aged just sixteen he felt the call to priesthood which he immediately embraced, notwithstanding some initial opposition from his family. His consecration to God included an intense desire to “do good” to one’s neighbour, which he did using every means available: material, spiritual, and cultural.

While studying theology at Padova in north-east Italy, he was also open to other disciplines in his quest to understand the human person. Full of enthusiasm and energy he initiated a number of projects including the writing of a Christian Encyclopaedia to counter the famous, but secular, French Encyclopaedia and the founding of a society of friends with the aim of promoting what today we call the ‘evangelization of culture’.

Though these projects did not meet with success, it was during this time that Rosmini discovered the essential principle, which from then on would guide his entire life: the Principle of Passivity. In the wake of their ‘failure’, he realized that it was not so much what he had hoped to achieve which was at fault but rather how he had set about it. Rosmini felt compelled to ask himself: Did my plans spring more from my own subjective desire to do good than from a desire to do the will of God?”. Reflecting in this way, Rosmini articulated the principle in its two parts: be ready to undertake any work (or project) of charity but only so long as it is God’s Providence that presents it; in the meantime, immerse oneself in the commitment to continual conversion, seeking the amendment of one’s own life.

It was during this period that a further key foundation of Rosminian spirituality took shape: the service of universal charity. Rosmini understood love/charity as embracing the whole person and thus to be of three parts: material, intellectual and pastoral. Guided by Providence, Rosmini went on to attain prodigious achievements. In addition to founding two religious Orders (the Institute of Charity – priests, brothers and lay members – as well as the Rosminian Sisters of Providence), he maintained friendship with a great range of people; indeed his published letters run to thirteen volumes. He elaborated a new system of Philosophy and was retained as a political advisor to the then government of Piedmont. Though chosen by Pope Pious IX to be elevated to the College of Cardinals this honour was denied him. Rosmini in fact suffered much at the hands of malicious intrigue, yet his love for the Church remained undinted and he remained tranquil, believing God orders all events for the spreading of his Kingdom. In the years before the Second Vatican Council his thought was rediscovered and appreciated anew. After many years of misunderstanding he has recently been Beatified.

“Of the holy men who have enriched the life of the Church there can be few who present so many facets of genius as Antonio Rosmini. He was a philosopher with original views; an ascetic who suggested new aspects of the spiritual life; an educationalist who stressed the need of integration of all human activities towards their ultimate purpose; a political writer who studied the nature of the State and the relations of Church and State; a literary scholar and friend of Manzoni whom he influenced considerably. Built for friendship he numbering among his intimate friends Gregory XVI, Pius IX, St John Bosco, and St Maddelena di Canossa. He was a pioneer in liturgical reform, a prolific writer, and a director of souls. The unity of his activities was based on the simplicity of his holy life.”
Claude Leetham

Read about the Beatification of Antonio Rosmini