by Cormac
Glencomeragh, Hermitages, news, Retreat
Comments are off

“Set in a valley between the Comeragh Mountains and Slievenamon this project’s refinement of making in a special place combines with its lean use of materials to create an architecture of memorable and elegant simplicity. Nestling on a hillside – offering a remarkable array of seasonal colour and scents enveloped by the rushing sounds of the waterfall and stream which is a tributary to the Suir – the scale and complexity of the Poustinia design is derived from its role as a hybrid of architecture and landscape which somehow succeeds in transcending both.”

So said the jury in deciding the winner of The Royal Institute of the Architects of Ireland’s (RIAI) Triennial Gold Medal for 2004-2006, presented in Dublin last month.  Architects Tom Maher and Kevin Bates received the award from President Michael D. Higgins at a ceremony in the RIAI offices, 8 Merrion Square, on Friday, 8th November. 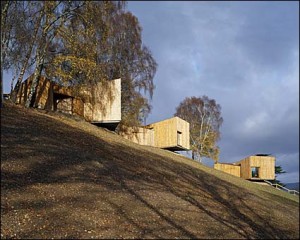 Built to a unique design and constructed and finished to the highest standard, the houses offer the visitor a never to be forgotten experience. Each Poustinia is centred around a sacred space, which invites you to connect with your inner self. This space is open to the elements, symbolizing the vulnerability at the centre of each human heart. At the same time the hermitages reach outward, to bring you closer to the wonders of God’s creation in beautiful natural surroundings.

A month after the presentation of the RIAI Gold Medal, Director of Glencomeragh House of Prayer, Fr. Paddy Pierce I.C., reflects on the event:

“When RTE’s correspondent Damian Tiernan arrived in Glencomeragh House on Friday morning, November 8th, we were excited about the events of the afternoon but had no idea that we had won the Gold Medal Award. We were under the impression that RTE had sent a rep to the four centres which had been short-listed for the award. It was only on reflection later in the day that I remembered the care and attention to detail that he had shown throughout his visit. When we arrived at the offices of the RIAI we were, once again, ‘hoodwinked’! We were told that a representative of each of the finalists would be taken to another room for a short interview but of course, as it turned out, we were the only ones interviewed.

“So, you can imagine the excitement when the winners were announced. We were ‘up against the giants’ as we had been told so it was all the more exciting to win. The hermitages had already won four major architectural and construction awards and this one was the icing on the cake. For an architect in Ireland no higher accolade can be achieved. The President of Ireland, Michael D. Higgins, who presented the awards, was most complimentary in his remarks about the significance of the award going to such a project, one that would reach out to people in a different way than much of what happened during the years when the hermitages were constructed.

“We hope and pray that Glencomeragh House and the Hermitages will be there for many years to come and that people from every creed and race will continue to find peace and solace there.”

Accommodation at the hermitages in Glencomeragh is open to booking for all members of the public and groups.  More information, including contact details and pricing, can be found here: http://www.glencomeragh.ie/Hermitages

To read more about the awards go to: http://www.riai.ie/index.php/news/article/the_riai_gold_medal_for_architecture_2004_2006_poustinia 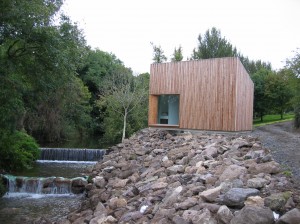